So.
After taking December off, the #BookClubCookbookCookingCrew returns in January with the Pajama Chef's invitation to make Mrs. Enger's Cinnamon Rolls with Coffee Icing and read Peace Like a River by Leif Enger.


I was excited about reading this.  I thought it sounded good from the synopsis in the cookbook.  I turned to my local library's catalougue...
...and discovered that I could only get it in audiobook form.  10 CDs.
I am not new to audiobooks.  My mom gives us one each year for Christmas, and we often read them in the fall as we go to and from football weekends.  All you need is time.  My old commute would have been perfect.  My 5 minute commute now is not so much.  I only made it through 3 CDs.
While the story was interesting, and I probably would have finished the book in paper form, I just couldn't find the time or the interest to sit and listen in the house to the book.  Not even Swede's poetry could get me into it.
I had, however, already decided what I was going to make as my recipe this month.  Pancakes!  Pancakes are mentioned a couple of times early in the story.  The first is as dinner when duck hunting, but it was the second time that cemented what I planned to make.
Reuben and his father go to a revival meeting at the local church.  Reuben sneaks out and shares an orange with his current infatuation before announcing that he can cook...and the 2 of them make pancakes in the church kitchen during the revival.  I giggled as they prayed in the sanctuary, aroma of frying batter heavy in the air, inspiring turns of phrase that were so, so awesome.
Reuben and Bethany didn't make pancakes like these, but they smelled so, so good on a cold Saturday morning in the house.  Say grace and dig in.
I present to you now from Judicial Peach, Gingerbread Pancakes:

Method:
1.  In a measuring cup, stir lemon juice into milk and let set to sour.  In a medium bowl, stir together flour, baking powder, baking soda, salt and spices.  In a second bowl, beat vanilla, eggs, molasses, butter, ginger and milk until well combined.
2.  Pour wet ingredients into dry, stirring with a whisk until combined.  There will still be some lumps in the batter.  Heat and lightly grease griddle.
3.  Drop batter by 1/4 cupful on hot griddle and cook until full of bubbles and golden brown before flipping to finish cooking.  Continue to make pancakes until all the batter has been used.  Enjoy with butter and maple syrup or icing sugar. 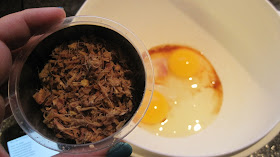 How much do I love Gourmet Garden's Lightly Dried spices?  So, so much! I suck at grating ginger when fresh (even though it smells amazing), and this little bowl has all the prep done for me.  Fresh would be as good, if not better.  But don't use powdered, please? 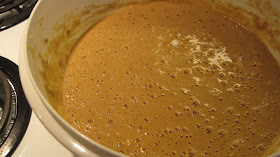 A bubbly, lumpy batter that's ready for the griddle.  I love leftovers of pancakes too as I freeze them and then toss a couple in the toaster on a weekday for a quick and different breakfast. J asked me today if I'd like a griddle for my birthday, and I kinda would.  A frying pan doesn't cook more than 2 pancakes at a time, so it's a bit of a long process to make 16 of these.  But they smelled so good while cooking. 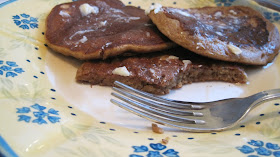 And they tasted so good while eating!  They're not overly sweet.   The molasses isn't overpowering either.  The ginger shone through.  The maple syrup is delicious, but I started thinking about a hot lemony curd-style syrup that sounded delicious.  I just didn't have the time to experiment.  There were pancakes to eat.


Giveaway
This month Sarah at The Pajama Chef, this month's host, is giving away a copy of the book.* Enter to win a copy of the cookbook so you can join us in future months, if you wish!

One of our lucky readers - US and Canada only! - can enter to win a copy ofThe Book Club Cookbook, Revised Edition: Recipes and Food for Thought from Your Book Club's Favorite Books and Authors by Judy Gelman and Vicki Levy Krupp, courtesy of Tarcher-Penguin. Giveaway runs from January 1st till January 31st at 6 o'clock PM, Pacific time. Please see terms and conditions in the rafflecopter widget below. Many thanks to Tarcher Books. You may find Tarcher: on the web, on Facebook, on Twitter, and on Pinterest.

a Rafflecopter giveaway
*Disclosure: Sarah received a complimentary copy of The Book Club Cookbook, Revised Edition: Recipes and Food for Thought from Your Book Club's Favorite Books and Authors by Judy Gelman and Vicki Levy Krupp as an opportunity to give a copy away. Opinions are our own. We received no further compensation for our posts.
Sarah at 10:00 AM
Share